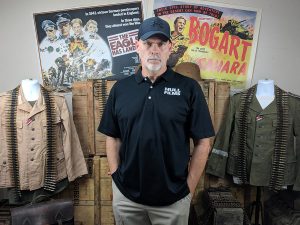 The Site is a World War II thriller featuring an international cast. The story was written by Tim Hull, a 26-year veteran of the film and video industry in Southern California. Born and raised in Los Angeles, Tim has always wanted to create an epic World War II thriller such as “The Site”. The film is unique in that it connects our main characters in the present-day to events in 1943 North Africa. Key scenes will be shot at the same location as 1943’s classic war film ‘Sahara’, starring Humphrey Bogart. We began pre-production in 2018, and many of the props have already been acquired.

Unfortunately, production was suspended in March 2020 due to the global situation, just as we were preparing to launch our Indiegogo campaign. However, we are now ready to re-start with your help!

We have many great Indiegogo crowdfunding perks planned, including authentic World War II equipment used in the film. So, please be sure to join our mailing list to receive updates on our 60-day funding campaign that will be launching in March 2022.

Both Films
Sahara 1943
Five Graves to Cairo 1943
Be sure to check out our fundraising campaign backer perks at Indiegogo!
Visit Indiegogo
Send this to a friend